Discussions about eggcorns and related topics

Registrations are currently closed because of a technical problem. Please send email to

The forum administrator reserves the right to request users to plausibly demonstrate that they are real people with an interest in the topic of eggcorns. Otherwise they may be removed with no further justification. Likewise, accounts that have not been used for posting may be removed.

Thanks for your understanding.

From the literary eggcorn beat…

Mary—who became Mary Shelley on her marriage to Shelley later that year—described the late-night conversations at the Villa Diodati in her introduction to the revised single-volume edition of Frankenstein in 1831: “They talked of the experiments of Dr Darwin . . . who preserved a piece of vermicelli in a glass case till by some extraordinary means it began to move with a voluntary motion. Not thus, after all, would life be given. Perhaps a corpse would be reanimated; galvanism had given token of such things: perhaps the component parts of a creature might be manufactured, brought together, and endued with vital warmth.”

The vermicelli is a misremembering on either her or Shelley’s part. Darwin had actually written “vorticellae” in his notes on spontaneous generation in The Temple of Nature. He was describing a microscopic aquatic filament found in lead gutters that when dried out shows no sign of life but “being put into water, in the space of half an hour a languid motion begins, the globule turns itself about, lengthens itself by degrees and assumes the form of a lively maggot. . . swimming vigorously through the water in search of food.”

What Stott calls a “misremembering” looks suspiciously like an eggcorn. You can see Erasmus Darwin’s description of the revivification of a vorticella by going here and doing a search for “vorticella.” Mr. Darwin seems to be referring to the animalcule that we still call a vorticella: 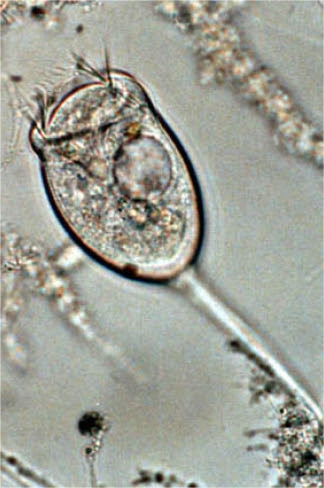 Hatching new language, one eggcorn at a time.

Delicious. Isn’t there a worm hidden there in ‘vermicelli’ to add to the image?

Powered by PunBB
PunBB is © 2002–2005 Rickard Andersson
Individual posters retain the copyright to their posts.